What do the Battle of Waterloo, Julia Child and Gordon Ramsay all have in common? In a word; wellington.


The most common form of the wellington dish is Beef Wellington, a dish that covers a piece of beef in some sort of pâté (or sauce) and is then wrapped in puff pastry and baked to completion. This dish was first rumored to make its appearance shortly after the Duke of Wellington led the British charge to defeat Napoleon Bonaparte in the Battle of Waterloo in 1815. Apparently ending the Napoleonic Empire comes with such glory that your reward is a dish resembling the look of a wellington boot being named after you.


This is not surprising, as puff pastry has an extensive history in England and is a staple for any English pub or street cart menu even today.


While originating in the 1800’s, Beef Wellington became most widely popularized in the 1960’s when internationally-known American cooking instructor Julia Child prepared the dish for a New Year’s Eve special on her TV show “The French Chef”. The episode was widely broadcasted and has since become a staple in many chef’s cookbooks as a dish to master.


More recently, the dish became popularized again by modern day chef Gordon Ramsay, who has called it “the ultimate indulgence” and would definitely make it on his last supper menu. Clearly, this dish has left its mark on many culinary fiends in the world, and will most likely continue to do so for centuries to come.


What is Salmon Wellington?

As seafoodies, we’re here to take Beef Wellington to the next level. While we respect its beefatarian roots, we’re looking for a dish that brings that same, historically popular dish to the table, but a splash healthier and more accessible to those who don’t live and breathe red meat meals. Enter Salmon Wellington. It includes everything you’ve enjoyed about Beef Wellington - the pâté, the puff pastry, the baking - only the slab of beef is replaced with a nutritious, low calorie wild Alaskan salmon fillet.


We’re particularly fond of this twist as the flavors of wild Alaskan sockeye in particular really bring that same burst of flavorful protein many enjoy in the beef version. Rich in flavor but not too fishy in taste, sockeye is a great substitution in this Salmon Wellington recipe.


What to serve with Salmon Wellington?

What goes with Salmon Wellington as a side dish? Everything you’d normally serve up with a Beef Wellington, and more!


Because the parmesan, mushrooms and herbs are already baked into the spinach mixture that acts as the Salmon Wellington sauce, there is not much flavor that needs to be added. Chef Nicole highly suggests serving this recipe for Salmon Wellington with a side of cranberry sauce for all of your holiday gatherings, as the sweet and tart flavor pairs well with the rich flavor of sockeye. We’ve combined these flavors before in other recipes like a simple Red Wine and Cranberry Glazed Salmon and a Holiday Smoked Salmon Spread Ball. Both are a must try, especially during the holiday season.


Another great Salmon Wellington side dish is, simply, a green salad. Whether you go with a caesar or wedge, salads are the perfect complement to your Salmon Wellington as they provide a refreshingly light and crunchy balance to your otherwise flaky, buttery and filling meal.


However you serve it, your Salmon Wellington is best when shared with others. Use it to fancy up a date night or have a few friends over for a holiday party. We promise they’ll be sighing in pure joy by the time they lick their plate clean! Nicole is the in-house Chef at Wild For Salmon as well as a Recipe Developer and Food Photographer from Allentown, Pennsylvania with an Associate degree from The Culinary Institute of America. Her first memories are of planting seeds with her father and grandfather in their elaborate gardens and sharing their abundant harvests with friends and neighbors. The spark of both pride and joy she felt when sharing this food with others and seeing the happiness it brought them was what inspired her to pursue the culinary arts from a young age. Nicole has spent time exploring the Hudson Valley and Philadelphia food scenes, but her current home in the rolling hills of Central PA is where she most enjoys combining her two passions; exploring the outdoors, and good food.

This dish is great to fancy up a date night or have a few friends over for a holiday party. It would be served up great with some cranberry sauce and side salad since everything is already baked inside the pastry! We leave the skin on the salmon in this recipe because it cooks thoroughly and is easy to cut through and we like to eat the skin for the added nutrients. If you prefer to remove the skin we suggest letting the fillet or portions thaw slightly-but not completely- start to lift the skin with a knife so you can peel the skin at the edge. A dry paper towel is really helpful here to keep a better grip on the skin. It's easier to remove the skin while the salmon is still slightly frozen and firm. 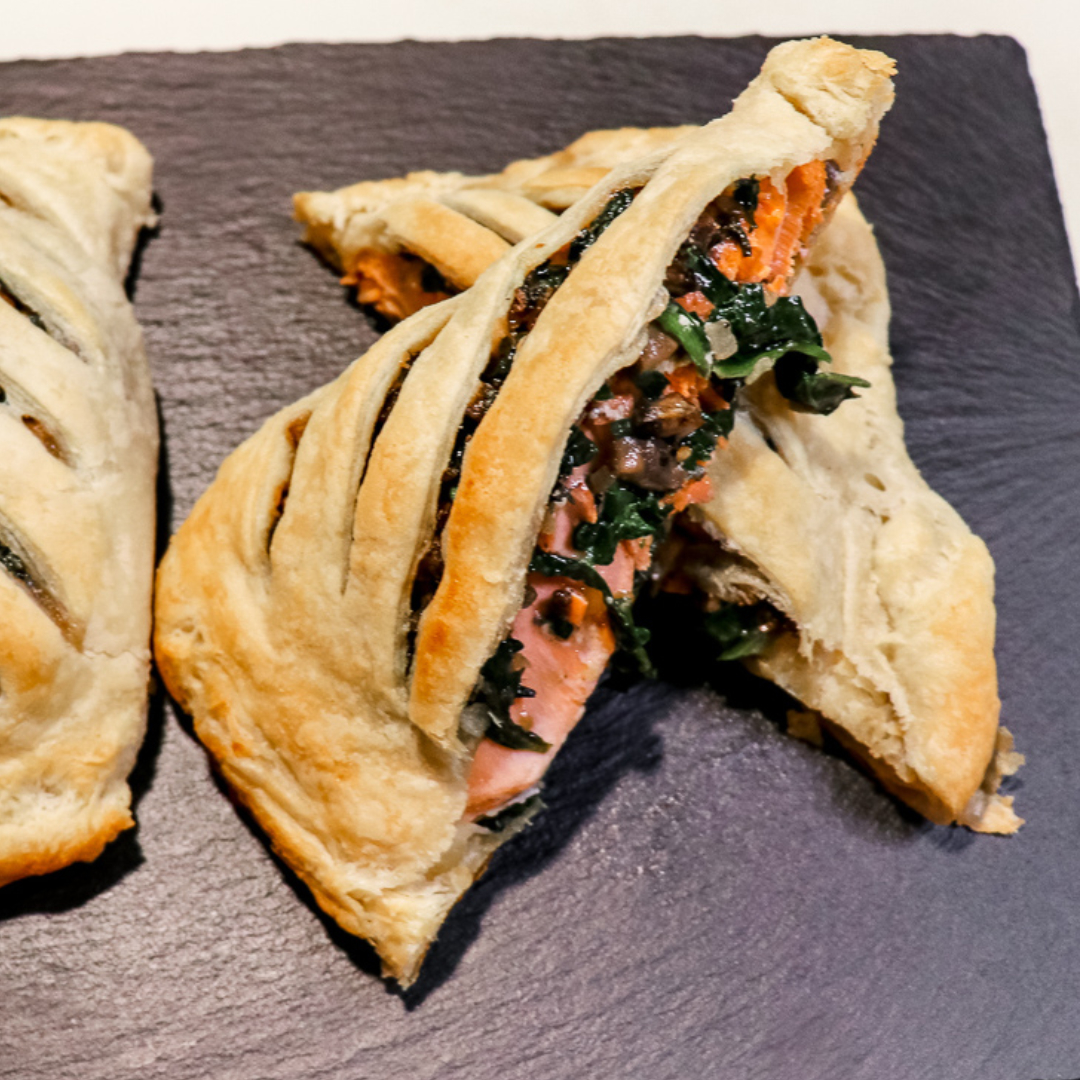