Fall is here and you know what that means. Sweatshirts, scarves, pumpkin spiced lattes and apple cider! It certainly seems like most everything has a hint of apple cider or pumpkin flavor this time of year. It’s also that time where we trade in the outdoor grill for baking some savory recipes in the oven.

Whether you're a Granny Smith fan or more of a red delicious person, you'll likely be taking part in some sort of apple themed cuisine this fall.

So of course we wouldn't be us if we didn't incorporate our wild caught sockeye salmon into a delectable fall dinner.

Chef Nicole has developed a delicious apple cider salmon recipe that’s sure to put a smile on your face and a warm meal in your stomach. All centered around your love for fall. What makes a great fall meal? Well, you certainly want something warm. Baking salmon in the oven is one of the easiest ways to prepare our wild caught sockeye.

However, if not considered, it can be easy to dry out your salmon when baking. This is why an oven glazed salmon dish is ideal!

The glaze, in addition to providing a baked-in savory flavor to your salmon, will also help trap moisture inside. This helps to prevent the salmon from drying out. Win-win!

Another thing we all love about fall is the variety of strong flavors. This rings true with this apple cider glazed salmon recipe. In addition to the sweet yet slightly tart flavor you get with apple cider, we want the aromatics to pop in this recipe. To do so, we’ve added in flavors of jalapeno, ginger, thyme, bay leaves, salt, pepper, and allspice.

Allspice may or may not be something that you’re familiar with. Sometimes known as a Jamaica pepper, myrtle pepper, or pimento, Allspice is the dried unripe berry of the “Pimenta dioica”, a mid canopy tree native to Southern Mexico and Central America. Now, it is cultivated in many warm parts of the world.

While it is commonly used in the production of Jamaican jerk seasoning, it’s been most utilized in the United States with - not surprisingly - fall and winter desserts!

It is also the spice that gives Cincinnati-style chili its distinctive aroma and flavor. We feel this parallel taste profile works nicely by utilizing the allspice in a baking dish to get your fall taste buds going.

If after trying our Apple Cider Glazed Salmon recipe you find yourself to be a fan of Allspice, let us know what other creative ways you find to integrate this unique spice into your wild seafood dishes! Like many regions around the country, making apple cider in Pennsylvania is a fall tradition akin to pumpkin patches and corn mazes. The Kurian family is no exception.

The Kurian's are heading into their ninth year making their own apple cider. The tradition started with a neighbor and family friend who had purchased Steve's grandparent's former orchard. Back when Jenn was a teacher, the neighbor (Phil) would bring the apples from the orchard and his press into the classroom and give a demonstration to the kids.

The excitement and joy the kids experienced was something Jenn wanted to bring to her friends and family. So, the Kurian's began hosting a day each fall where they would gather apples from various local sources and press apples together with their community.

The apples are harvested and stored in the root cellar that Steve built adjacent to his house until the day of the event. They hand press the apples using a crank press (similar to a grinder).

"I love that it's an old tradition that we can have the kids be a part of each year", Steve says.

"The kids look forward to it every year. It's one of the many things that signifies that it's fall!"Jenn adds.

Even in years like 2022 when the local apple production was less than ideal, the Kurian's sourced apples from Pennsylvania's Bedford County Orchards to ensure the event still happened!

The finished product is frozen to be enjoyed all year long. Jenn will often utilize some of the cider in an apple cider cake recipe! How to glaze salmon

Properly glazing your salmon is much simpler than it may sound. Utilizing the glaze to keep the fish from drying out is important, so make sure you have a generous coating prior to placing the dish in the oven for baking.

Allowing the glaze to caramelize will help it to remain in place during the baking of the salmon, which will, in turn, help the salmon to evenly absorb the flavor of the glaze.

At the completion of the baking process, spoon the glaze back onto the salmon after it’s pulled out of the oven.

Chef Nicole recommends simply moving the aromatics off of the salmon with a fork prior to serving. Nicole is the in-house Chef at Wild For Salmon as well as a Recipe Developer and Food Photographer from Allentown, Pennsylvania with an Associate degree from The Culinary Institute of America. Her first memories are of planting seeds with her father and grandfather in their elaborate gardens and sharing their abundant harvests with friends and neighbors. The spark of both pride and joy she felt when sharing this food with others and seeing the happiness it brought them was what inspired her to pursue the culinary arts from a young age. Nicole has spent time exploring the Hudson Valley and Philadelphia food scenes, but her current home in the rolling hills of Central PA is where she most enjoys combining her two passions; exploring the outdoors, and good food.

Chef Nicole has developed a delicious apple cider salmon recipe that’s sure to put a smile on your face and a warm meal in your stomach. All centered around your love for fall. 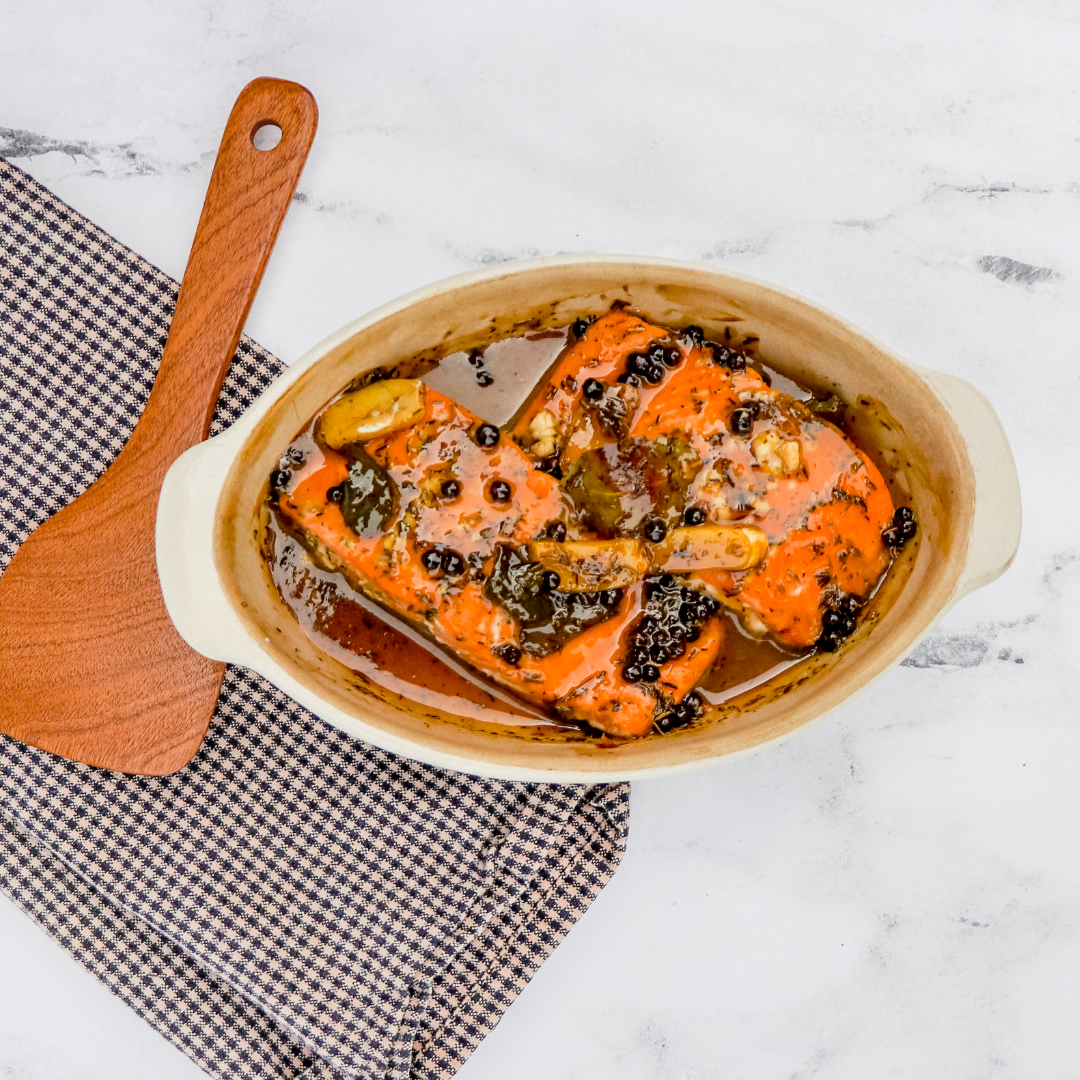